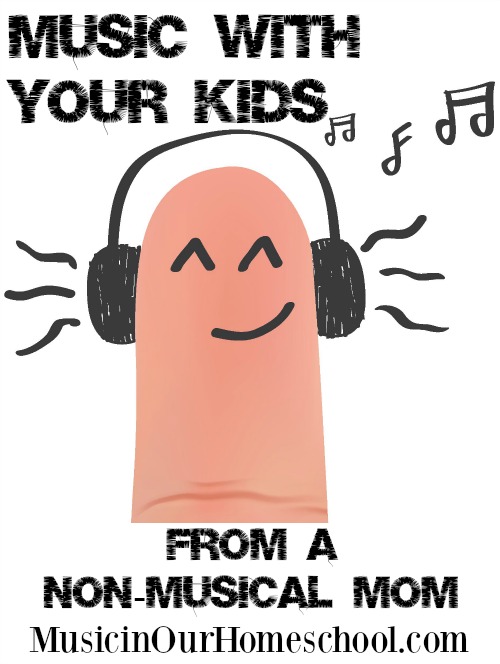 [Today’s article “Music with your Kids from a Non-Musical Mom” was written by Michelle Habrych.]

My daughter loves to sing. When she was an infant, I used to sing soothing worship songs to her to calm her, and it must have inspired her. I still remember the first time I heard her sing it on her own: a little toddler voice singing, “My Jesus, my Savior,” has stayed with me for over a decade.

I’ve always loved music, probably because I grew up with it in the home. My father was a disc jockey and entertainer. I cannot remember a time we didn’t have some kind of music playing in the house.

My children have also experienced that, but usually with very different musical choices. But that was it. I am not vocally gifted, nor do I play an instrument. I could see things were different as far as my daughter was concerned. So I encouraged her to sing and dance. She even played guitar for a couple of years.

How do we fit music into our homeschool? There have been times when it has been formal, such as in a class setting, but typically we just surround ourselves with music. My daughter performs. She takes musical theater classes through the park district or at our homeschool group. She enjoys singing and dancing as she tells a story. She listens to the musical tracks on repeat in her bedroom and memorizes her role.

When she took guitar lessons, it was from another homeschool mom who was willing to give lessons during the school day at a ridiculously low rate. This teacher encouraged the students to perform together as well as separately. Their recital was a wonderful chance for the students to show off what they had learned in a low-pressure environment.

My son isn’t interested in performing music, though he did play recorder for a year through lessons at our homeschool group. He really enjoys listening to music. We often have music on while the kids work on their schoolwork. We have a classical station, a “beats for studying” station, and my son’s Minecraft-themed station. He particularly enjoys scores from movies, including anything by John Williams. For musical education, I have used Gena’s lessons from 21 Lessons in 20th Century American Music Appreciation in our homeschool. My son really enjoyed learning about the types of music as he studied the 20th Century for history last year. We are looking forward to the next set of lessons which will be ready in August! Michelle Habrych is a homeschool mom of teenagers. Her favorite musical choices include the Beach Boys, Harry Connick Jr., Third Day, and Vivaldi