Heitor Villa-Lobos (1887-1959) is one of the most well-known composers, conductors, and folklorists of Brazil. His father taught him to play the cello as a child. He was also interested in street music and secretly learned the guitar. He wrote some guitar pieces called Suite Popular Brasileira.

When he was a young man, Villa-Lobos traveled throughout Brazil soaking up the folk influences which later inspired many of his compositions. He also spent time in Paris, France where he learned to appreciate the European classical music tradition. One of his most famous compositions was a cycle of nine suites, for various combinations of instruments and voices called Bachianas brasileiras. In this piece, he unites Brazilian folk elements with compositional techniques of J.S. Bach and other European composers.

The best-known piece is the first movement of Bachianas brasileiras No. 5, for soprano and eight cellos, which play guitar-like pizzicatos. Pizzicato means “plucking” the string.

Folk artist Joan Baez made this piece famous in the United States in the 1960s.

In the 1920s Villa-Lobos wrote a series of pieces called Choros.

In total Heitor Villa-Lobos wrote almost 1000 operas, orchestral pieces, choral works, and chamber compositions. He was diagnosed with cancer in 1948, but still did a tour of the world before he died in 1959.

“A truly creative musician is capable of producing, from his own imagination, melodies that are more authentic than folklore itself.   –Heitor Villa-Lobos

Download your free 5-page printable pack for the 15-Minute Music Lesson for Composer Heitor Villa-Lobos below. It includes the lesson plan, a page on the composer, a page on the guitar, a page on Brazil, and a “Listen and Draw” page. 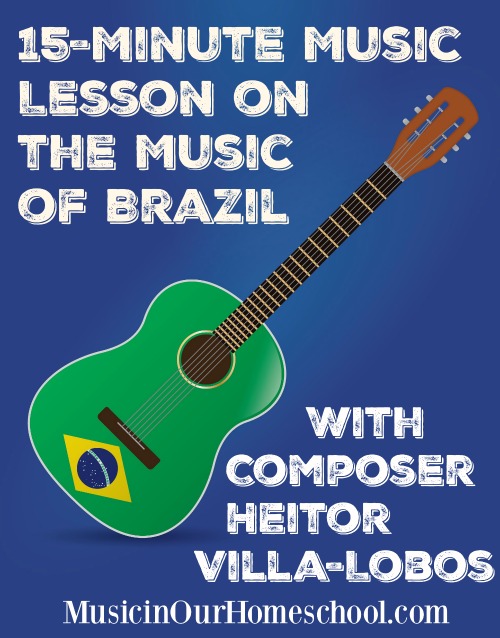 Previous Post: « 5 Benefits of Using Piano Wizard to Learn How to Play Piano
Next Post: The Best Ever Resource to Use When Teaching 20th Century History »