“Casey at the Bat”

“Casey at the Bat” is one of the most well-known American poems. It tells the story of Casey, a proud baseball star, who strikes out at the bottom of the ninth and causes his team to lose the game. The story is timeless, and many are surprised to learn that the poem was penned in 1888! It was published in a San Francisco newspaper. That same year a vaudeville star named DeWolf Hopper performed it for an audience of baseball players. It was met with such success that he ended up performing it over 10,000 times during his career.

What does “Casey at the Bat” have to do with music? Well, I’m glad you asked!

Two activities to do: 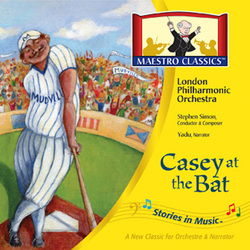 Two more YouTube versions of “Casey at the Bat” to enjoy:

Some music is added to this cartoon version by Walt Disney from 1946.

And here we have the great James Earl Jones reciting the poem.

Have some fun studying baseball with these links:

Previous Post: « Music And Poetry Landing Page
Next Post: Music and Poetry: “All Creatures of Our God and King” Hymn Study and Copywork »