I am thrilled to be telling you about a new movie musical that premieres on Netflix today called A Week Away! I was able to watch a virtual screening premiere last weekend. See below to learn all about the new musical. 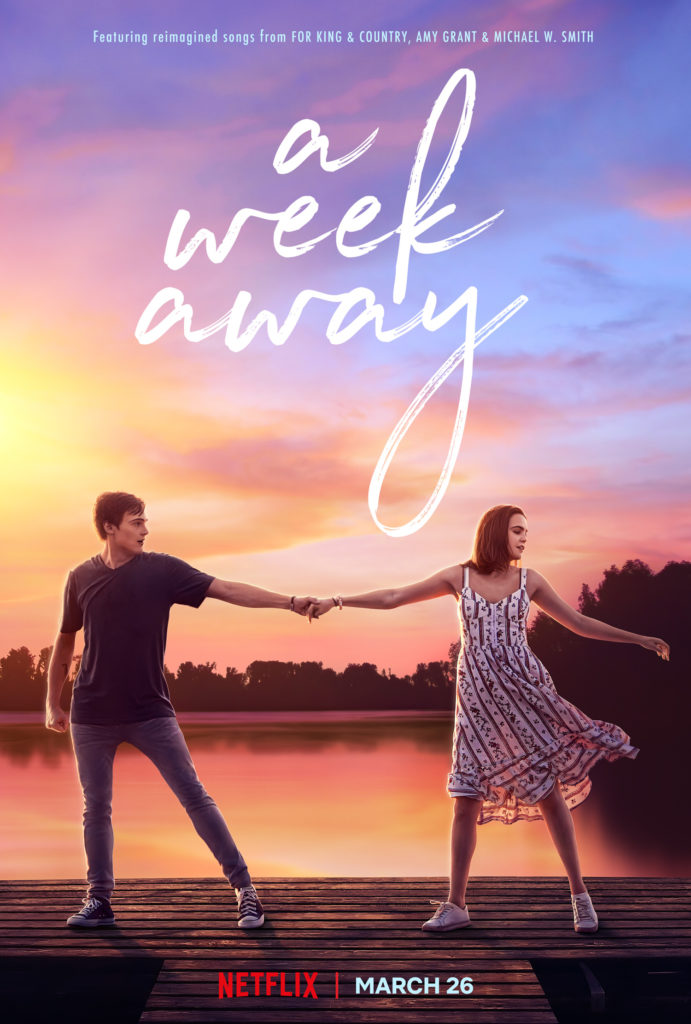 Disclosure: Many thanks to Capitol Christian Music Group and Netflix for providing this product/product information for review. Opinions are 100% my own and NOT influenced by monetary compensation. I did receive a sample of the product (virtual screening and a sweatshirt) in exchange for this review and post. Affiliate links are used. 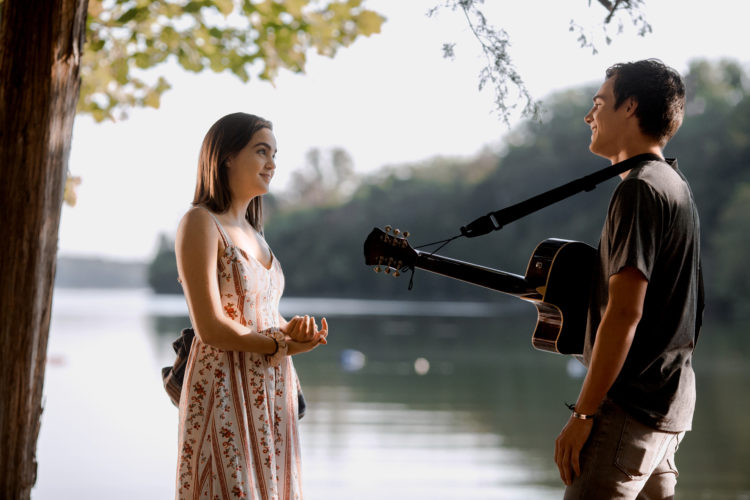 A Quick Summary of A Week Away

A Week Away is the first faith-based musical of its kind. Troubled teen Will Hawkins has a run-in with the law that puts him at an important crossroad: go to juvenile detention or attend a Christian summer camp. At first a fish-out-of-water, Will opens his heart. While at camp, and with the help of his music, new friends, and love interest, he learns the healing powers of kindness, forgiveness, and faith can be found in the most unlikely of places. And, he finds a sense of belonging in the last place he expected to find it!

My Review of A Week Away

A Week Away totally has a High School Musical/ Camp Rock vibe! I know the music will appeal to the crowd who loved both of those other musicals.

The story was sweet, if a bit predictable. It’s a feel-good story, and we all need those right now! Some of the kids have their struggles with rough home lives, loss of parents, guilt, and fear. But, they join together every summer for “a week away” at summer camp where they compete to win and build each other up.

Listen to the A Week Away soundtrack here!

Even though it’s a Christian-based film and they are at a Christian camp, it isn’t overly preachy, which is definitely a plus.

As a music director for full-scale musicals in our area, I was critiquing the singing and dancing pretty thoroughly, and it passed my test. The only thing I didn’t like were some of the harmonies, but overall the singing and dancing were fun and catchy. I loved hearing old songs (such as “Place in this World,” “Big House,” and “Baby, Baby”) mixed in with newer songs written just for the film. And, I was very impressed with the three guy leads’ voices!

The acting and directing were well-done, as well. Sometimes, Christian films aren’t as high quality in this area, but A Week Away is! I give it 5 stars out of 5!

The People Behind A Week Away 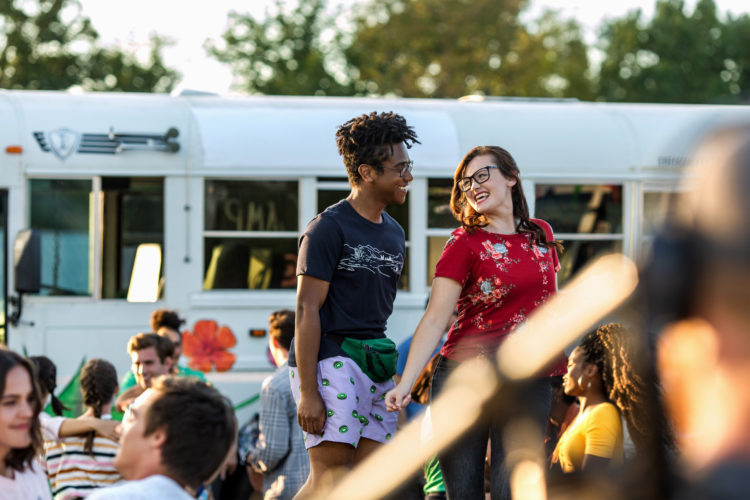 Fun Facts about A Week Away

Legendary contemporary Christian music artists Amy Grant and Steven Curtis Chapman make cameo appearances in the film as a camp counselor and as the camp lifeguard, respectively. I must admit, I didn’t recognize them!

The film was shot on location at YMCA Camp Widjiwagan just outside Nashville, Tennessee, in 2019. Unlike other productions where different elements are spread out about the country or done virtually, A Week Away had rehearsals, filming, and music recordings all in one location. Both the producers and the cast agreed that creating all the elements at one location at a real, functioning summer camp added an air of authenticity to the production.

Actor Kevin Quinn, who plays Will, originally auditioned for and was cast as Sean. However, due to experiences in his own life, particularly the loss of a close friend, he felt a stronger connection to the character of Will. He asked to re-audition for that role, and the rest is history!

Kevin was a contestant on American Idol and has said his several summers at camp helped him to prepare for the experience. At camp, he won the “Best Spirit” award one year and “Most Outstanding Camper” the following year.

Actor Bailee Madison, who plays Avery, has been acting since she was a little girl, so summer camp wasn’t part of her childhood. Working on A Week Away felt like making up for lost time for Bailee, who felt like a kid in a candy store. Looking back on the experience of filming A Week Away, Bailee was thrilled to be surrounded by people her own age since she has spent much of her career primarily acting alongside colleagues much older than her. 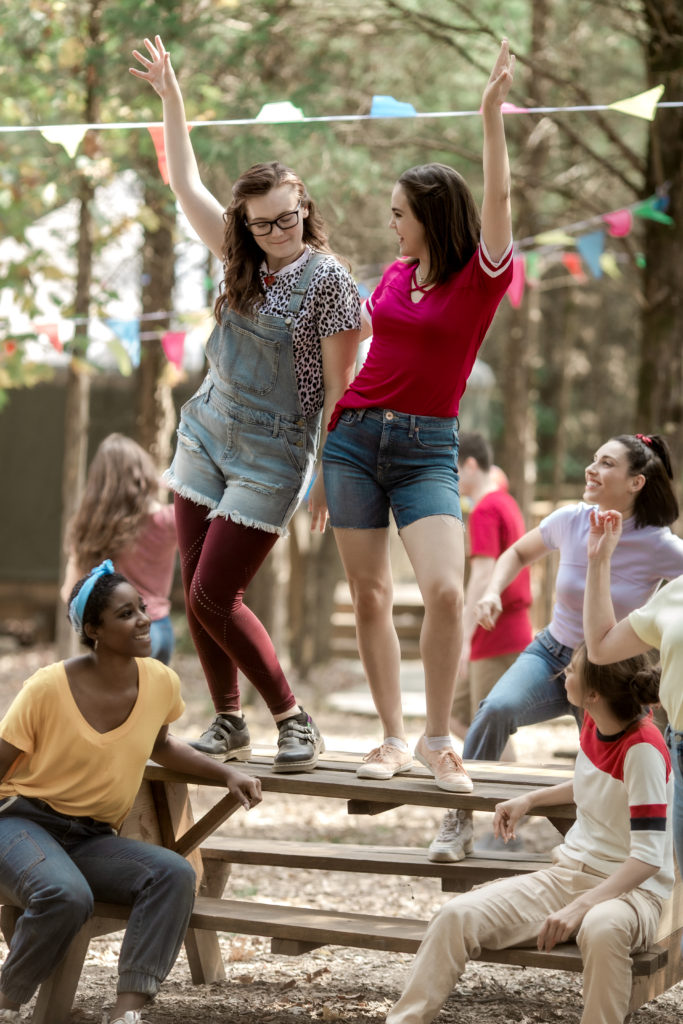 The original song “Good Enough” is one of Bailee’s favorite songs in the film.

“I think growing up in the world of social media, while you are always being compared and judged on how you should look and dress sets up a facade of false perfection. And we need to be reminded that we are exactly who are supposed to be. That we are good enough just the way God made us. That’s such an important message right now.” ~Bailee Madison

Bailee adds that she is excited that the film is releasing during the current climate, when people are craving stories of human connection, touch, and conversation. She hopes that A Week Away is a glimmer of light for people who look back fondly on their own summer camp or vacation experiences or who look forward to times when they can reconnect with friends and family. 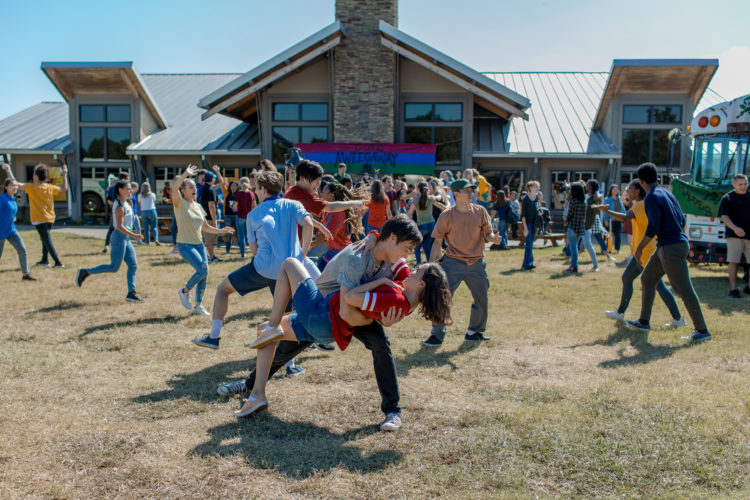 Perfect As a Family Movie

The producer and writer of the original story, Gabriel Vasquez, talked about how important it was to the team to create a film that both parents and kids could enjoy together. He knew that a key audience for the film likely attended summer camps like the one in the film and would no doubt recognize many of the songs in the film from their own childhood.

It was important to filmmakers to make a film that was authentic to the world of Christian summer camps and that was populated with characters who could openly and believably talk about their faith, while still making space for diverse perspectives and affirming the goodness in all people.

“We didn’t set out to make a Christian film,” says producer Steve Barnett. “We wanted to make a film that had Christian elements that have universal appeal.” 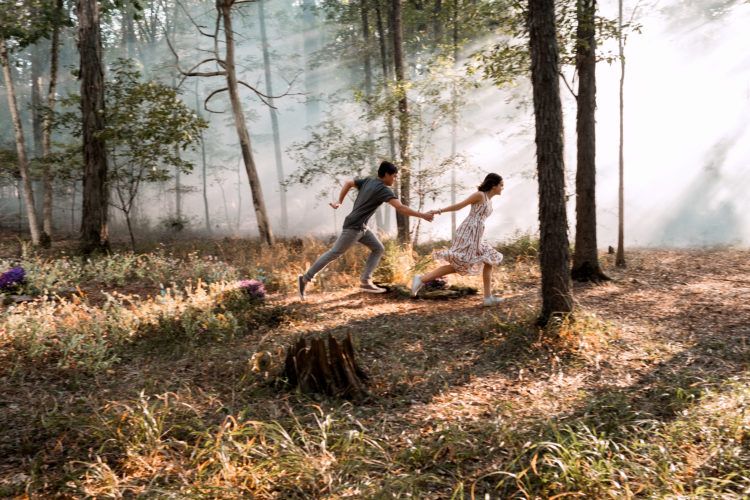 Cue the bugle. If anyone deserves the “Busiest Camper” award it would be Alan Powell. He is a writer of both the original story, the screenplay, producer; and contributed to many of the film’s original songs.

Even though he has sold 50 million albums worldwide and been on the Top 5 Billboard 200 for eight years in a row, the A Week Away soundtrack was a first of its kind for Executive Music Producer Adam Watts:

“It was a super-unique experience having Alan Powell, one of the film’s producers and one of the writers of the screenplay actually IN the studio. That was a first for me! He’s a musician himself, and his vision was incredibly clear and strong. We had great chemistry. I think there’s a palpable energy to these tracks that I think comes from us just having a blast in the studio.”

In addition to re-imaging the classic Christian hits, Adam Watts wrote the original songs in A Week Away. Because this was such a special project authenticity for him was key:

“From day one my goal as the producer and songwriter was to try to infuse the music with a sense of timelessness. I didn’t want to just use pre-existing samples, so I went around the camp set and recorded stomps and claps in the environment the film was being shot in. These subtle things add up.”

If the musical inspires you to have a spontaneous dance party, that’s because it kind of was! Adam Watts laughs:

“We set up a recording studio in one of the buildings at the camp. The cast would be rehearsing the scenes and learning all for the choreography in one building, and in-between they’d run over to our makeshift-studio for hours at a time to record their vocals.”

Choreographer Melena Rouse took it from there:

“Each number only had between 2 -4 rehearsals before shooting. We had to work fast and give it our all each time. Something really magical happens once you get all your dancers in the space and give them room to put themselves and their personalities into the project. Something bigger than the steps happens – and that’s what makes A Week Away so exciting!” 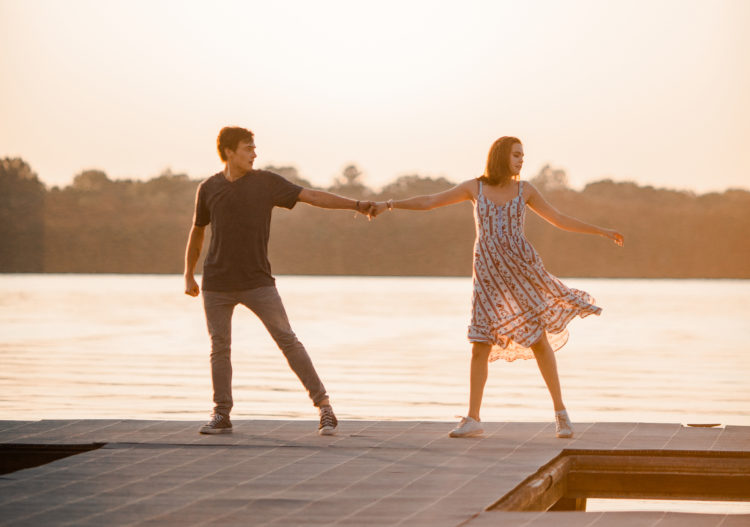 A Week Away was a 21-day shoot that featured more than 100 extra campers for the bigger musical numbers.

Choreographing the musical numbers at a real live summer camp could have proven challenging for some, but choreographers Melena Rounis and Paul Becker found the busses, lake, and hula hoops inspiring. Melena was thrilled:

“There was so much to get creative with and I really loved having such a variety of locations to create on and in. I mean, a “blob” and water hoses. It was a perfect dance party! I hope people can feel that energy when they watch the film.” 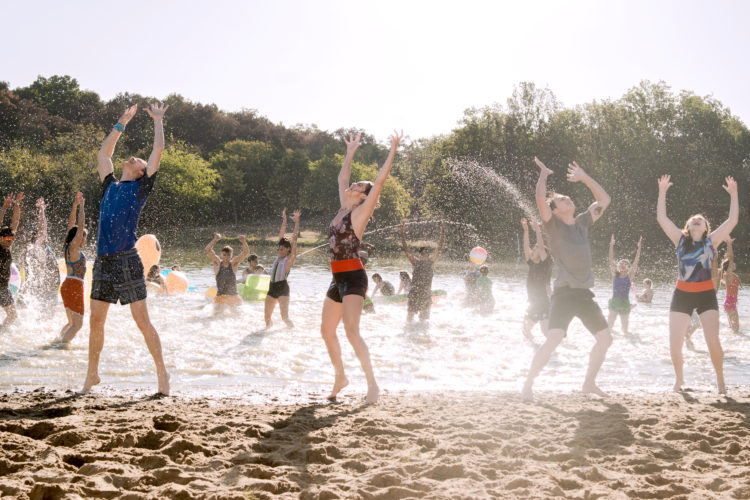 The A Week Away Soundtrack

If you’d like to order the physical CD or Mp3’s, you can get those on Amazon here. 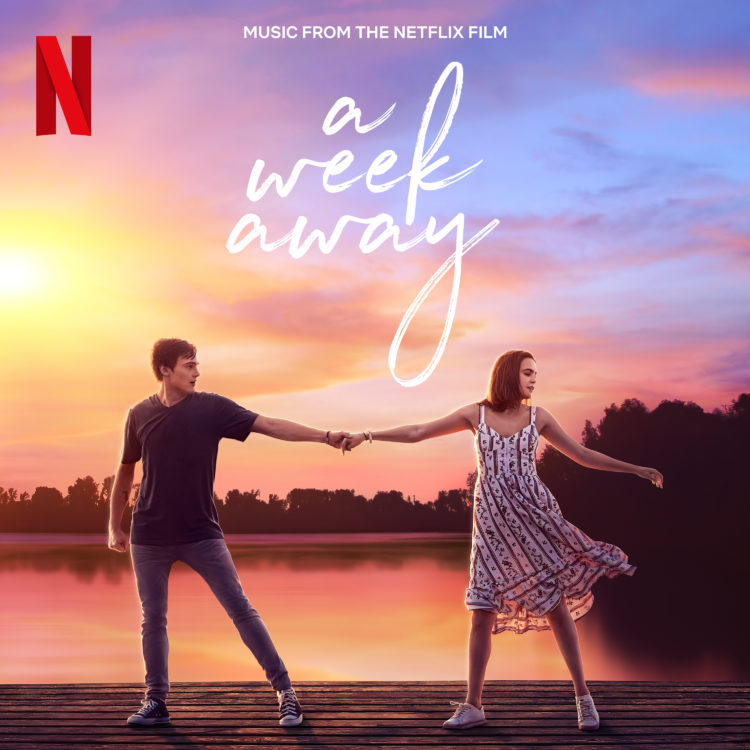 Listen to “Place in This World” here:

The soundtrack includes a special feature and bonus track of husband and wife duo, Johnnyswim, performing “Best Thing Ever.”

We will be giving away one A Week Away merchandise item:

Previous Post: « How to Use Hymns to Teach Truth and Doctrine
Next Post: 15-Minute Music Lesson of Music Inspired by Horses ~ Music in Nature Series »